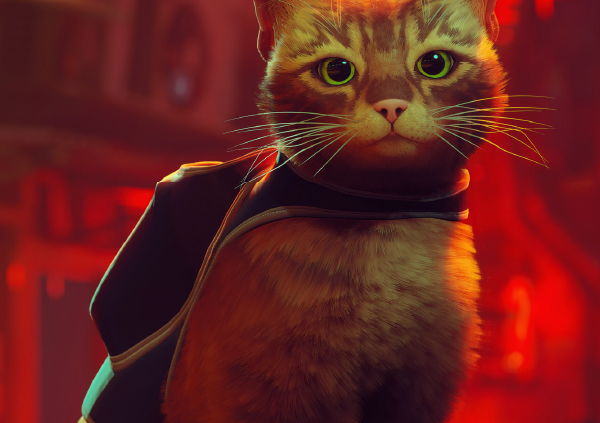 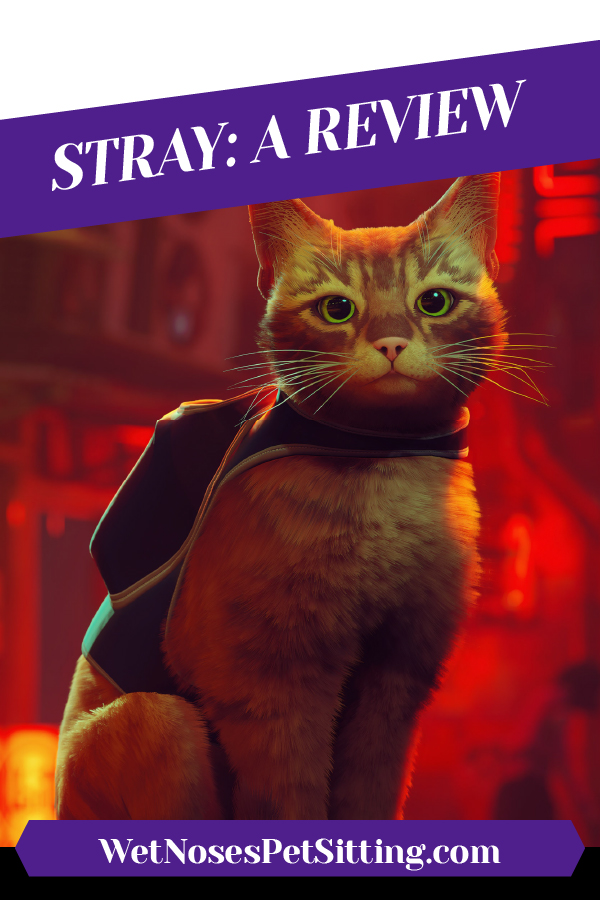 You might be thinking? What is a pet sitting company doing reviewing a video game? Stray (2022) has captured the hearts of thousands, ranking as the highest PC game of 2022. But what exactly has captivated gamers and pet sitters alike?

You play as a cat.

Not only do you play as a cat, you have a dedicated “meow” button. Yes, that means you can run through the world created by BlueTwelve Studio meowing until your hearts content. You’ll even get an achievement after meowing 100-times.

Other than those two details which most certainly have you hooked, Stray takes place in a cyberpunk world run by robots. By helping these robots you progress in the game. Not only making friends but making the world a better place. The game involves a variety of jumping puzzles. You have the option to be prompted to jump or figure it out yourself. I went with the prompt option. As much as I enjoy puzzles, I do also enjoy a chill game. Which Stray mostly is.

Stray is a short game. I beat it in around 5 hours but I was also going for achievements. Most people say it takes 2 – 6 hours to beat. There’s also an achievement for beating the game in under 2 hours so it can be done. If you’re looking for something to do this afternoon then Stray might be worth picking up. 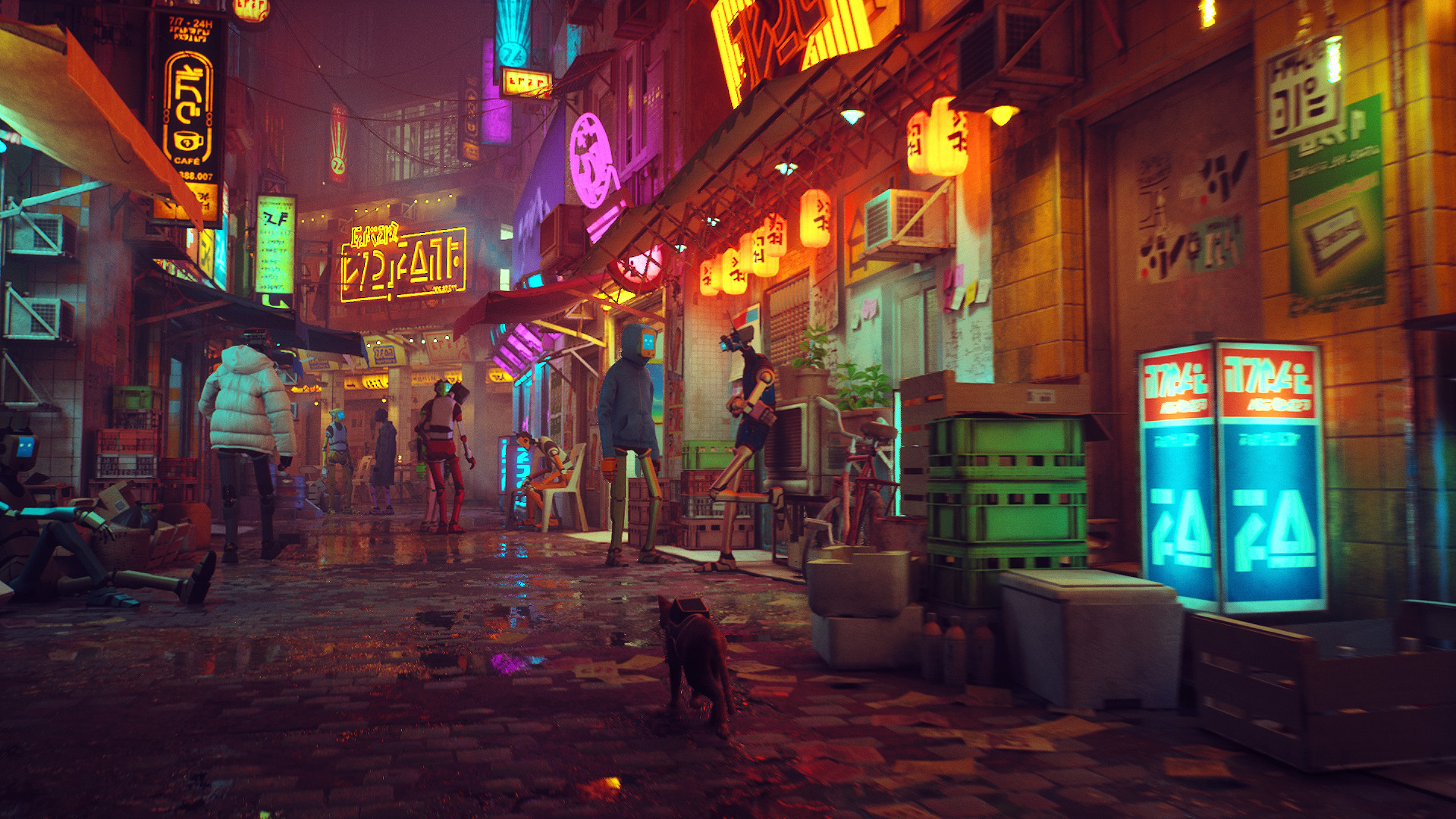 One of the areas you’ll encounter in Stray.

Shockingly, Stray did not mocap a cat but rather the developers watched Oscar. Who is Oscar? This is Oscar! 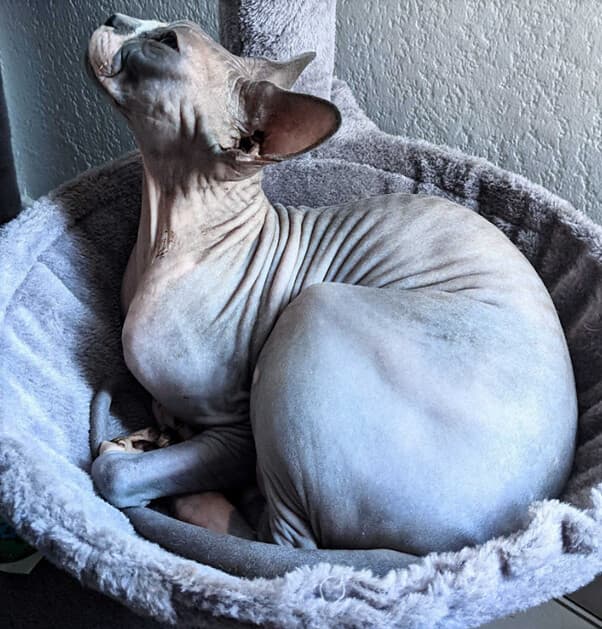 Oscar ran, played, jumped, and even itched himself. All things a normal cat would do and the developers captured his motions purr-fectly. It’s hard to believe they didn’t use mo-cap. But, can you imagine putting a mo-cap suit on a cat and getting them to act like a normal cat still? I can see why the developers chose to simply watch Oscar instead.

PurrSA: This is Murtaugh. The IRL stray cat adopted by BlueTwelve co-founders that inspired the hero of #Stray.

Murtaugh is the inspiration for the adorable protagonist you play as. The modding community for Stray has taken off. Classic cats like Garfield are options to play as. Or would you rather have someone 3D model your personal cat into the game? While I believe the lovable Murtaugh is a perfect choice, being able to customize who you play as is a nice community feature.

But how could we forget those adorable meows you hear throughout the game. Those were voiced by Lala.

This is Lala, she’s voice actor in the game #Stray which was released two days ago on ps5. pic.twitter.com/0tbW1bqzBB

While some games like Cat Cafe Manager choose to use a mix of human-made cat sounds and actual cats, Stray went all-in. I can imagine being in the studio trying to capture Lala’s vocals. That must have made the audio engineers day!

If you like cats and video games then I would pick up Stray. The price tag of $30 is a bit steep for what I have heard described as an “interactive art piece”. Which I can’t disagree with. I’d say Stray is more in-depth than a walking simulator (a whole class of game of it’s own) but by no means is it worth $30. $20? That would be more reasonable. But can you really put a price on that dedicated “meow” button?

What are the Leash Laws in Loveland?

When Should you Book your Pet Sitter?
Scroll to top
Newsletter Registration